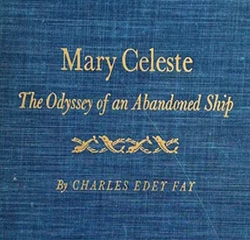 Since the anonymous publication in 1884, of J. Habakuk Jephson's Statement” by Conan Doyle, the name of the vessel has been repeatedly stated as Marie Celeste.

Correction: The name of the vessel was Mary Celeste.

Authorities: Records of the American Bureau of Shipping, New York. All registers issued by the United States Government from the time when the vessel came under the American flag, 31 December 1868 (register No. 485) up to the final register (No. 28) issued 4 August 1884, give, in every instance, the name of the vessel as Mary Celeste stating, in every instance, that previously she was the “British Bg. Amazon.” Records of the Atlantic Mutual Insurance Company, and correspondence (1872 to 1885) between Consul Sprague and Department of State, Washington, D. C.

Erroneously reported as found on board.

Correction: It has been authoritatively established that no boat was found on board.

Erroneously reported that the salvors found hot food, and cups of tea or coffee still warm on cabin table.

Correction: There was nothing to eat or drink on the cabin table and no evidence of preparations being made for eating. The rack was on the table.

Erroneously reported that the stove was warm and that there was cooked food on it.

Erroneously reported that, when found, all sails were set.

Correction: The only sails set were the lower topsail, jib and fore-topmast staysail. The fore-sail and upper topsail were gone, apparently blown away. The main staysail was lying loose on top of the forward-house. All other sails were furled.

Correction: The vessel was found on 4 December between 1:00 and 2:00 P.M. In as much as in those days the date, at sea, changed daily at the noon hour, the entry on the Dei Gratia's log was therefore dated 5, December, sea-time, which fact has caused some confusion as to the exact date.

Authority: Cable received by the Atlantic Mutual Insurance Company, 14 December 1872, Disaster Book No. 93, page 92. Testimony before Vice-Admiralty Court at Gibraltar, 1872. Letter from Consul Sprague (No. 123) on 13 December 1872 to Department of State.

Correction: The Mary Celeste was a half-brig. Vessels of this type were also called hermaphrodite brigs and brigantines. For the sake of convenience, all such vessels, have customarily been grouped with brigs in the Port List of the New York Maritime Register under the caption of 'Brigs' For the same reason, barkentines were grouped with barks under the single caption 'Barks.'

8. Method of bringing Derelict into Gibraltar

Erroneously reported as “towed” by the Dei Gratia.

Correction: The Mary Celeste was sailed all the way from the place where she was picked up latitude 38° 20' N, longitude 17° 15' W to Gibraltar by Mate Deveau and Seamen Lund and Anderson.

Erroneously reported as one of the names previously borne by the Mary Celeste. This name appears to have first been mentioned by 'Lee Kaye' (the pseudonym used by Laurence J. Keating) in article published by Chambers's Journal in 1926.

Correction: It seems clear from available records that the vessel bore only two names 'Amazon' and 'Mary Celeste' during her entire career.

Erroneously reported that the vessel's cargo consisted principally of sperm oil and spirit.

Correction: The cargo consisted of 1,701 barrels of alcohol shipped by Meissner, Ackerman & Co. of New York and insured in Europe.

The names of Pemberton, Dossell, Hullock and Venholdt constitute part of the ghostly crew invented by Laurence J. Keating, author of The Great Mary Celeste Hoax.

* A translation of a letter from Kunot Martens, father of Arian Martens, to the German Consul at Gibraltar and sent by him to Consul Sprague who transmitted it to the Department of State, indicates the correct name of this seaman.

12. Place of Construction and Name of Builder

Erroneously reported as having been built at Parrsboro in the shipyard of Henry Matthew Colfax, a name apparently invented.

Correction: The vessel was built at Spencer's Island about twenty-five miles south of Parrsboro, in the shipyard of Joshua Dewis, shipwright and boss builder. The vessel was first named Amazon.

13. Name of Master of Dei Gratia

Correction: The name of the master was David Reed Morehouse.

Erroneously reported that they were anchored alongside each other at New York before departure in November 1872.

There have been many erroneous reports of latitude and longitude. Last entry on log of the Mary Celeste was dated 24 November and indicates lat. 36° 56' N, long. 27° 20' W. Last entry on vessel's log slate was dated 8 A.M., 25 November, reading "Eastern point of St. Mary's bore 6 miles SSW." The correct latitude and longitude of this position, although not given in the testimony would appear to be 37° 01' N, and 25° 01° W, respectively. The position where the Dei Gratia found the Mary Celeste was latitude 38° 20' N, longitude 17° 15 W.

16. The Forehatch and Ships Cat

The testimony given before the Vice-Admiralty Court at Gibraltar, 1872-1873, affords no Evidence that the fore-hatch was found upside down, or that a cat was found on board. It is however known that, after the arrival of Mrs. Briggs and her child, there was a cat on board. It is not known whether or not it left the ship before sailing.