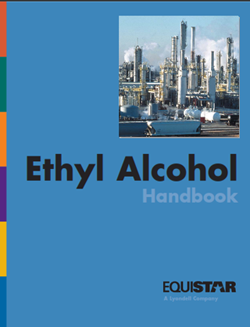 The Cargo - Spirit aka Ethyl Alcohol

There is some confusion in the description of the cargo of the Mary Celeste with one author claiming it was 'denatured alcohol' which seems to have propogated around the Internet and in the books published.

Shipping alcohol from the United States aross the world is mentioned in Charles Fay's book as being for the purpose of fortifying wine, not poisoning people !

Denaturing alcohol to make it undrinkable is to avoid excise duty. This is NOT charged on goods being exported, and the practice was only later introduced in the USA for alcohol used for purposes other than drinking..

Alcohol: The Myths and Realities

Ethyl alcohol has probably been used by human beings as a beverage for at least 300 centuries. Each culture has its own myths about the discovery and significance of this potent liquid. Who discovered it, and how the discovery came about, are lost in antiquity as is the discovery of fire and the invention of the wheel. But, however, and by whom alcohol came into existence, much has happened because of it. Some contend it started the first community life, since several years are required to produce a vineyard. Thus, the pursuit of the fermented product of the juice of grapes may have changed the nomadic pattern of early man to a settled one.

It was not until the 19th century that the term alcohol came to be used generally for wine spirits. 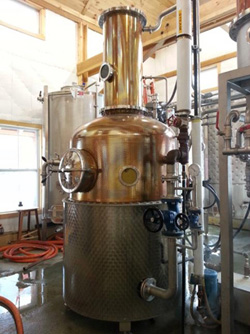 A modern copper batch still at the
Amherst Farm Winery

Probably because of its being the essence of wine and the intoxicating ingredient in many beverages whose production involved a fermentation process, ethyl alcohol must have been one of the earliest organic compounds to be investigated. Despite the Arabic origin of the word alcohol, the separation of ethyl alcohol from wine was apparently unknown to Arabian alchemists. The earliest known description of the concentration of ethyl alcohol by distillation of wine occurs in a Latin manuscript of the 12th century. It is assumed that ethyl alcohol was first separated by distillation around the 11th century in the wine districts of Italy.

Although ethyl alcohol had been known for a considerable time in a crude state in wines and beer, it was only later distilled.

The name ethanol was coined as a result of a resolution that was adopted at the International Conference on Chemical Nomenclature that was held in April 1892 in Geneva, Switzerland.

Tax-free alcohol in the United States

In 1897, a joint committee of Congress, investigating the importance of ethyl alcohol, reported its uses in industry as both "legitimate and necessary." The committee acknowledged that "there is scarcely a manufacturer in the country who does not use alcohol in the production of goods to a greater or lesser extent." This was the first of a series of reports and deliberations that led to the enactment of the Tax-free Industrial and Denatured Alcohol Act of 1906.

The Chemistry of Ethanol

Alcohol was traditionally produced by fermentation and concentrated by distillation. The maximum concentration of alcohol with water that can be produced this way is 95.6% ethanol is an azeotrope, which means the vapor state has the same ethanol-to-water ratio as the liquid state. Usually it is a few percent less. Distillation is an art as well as a science.

Obviously when shipping alcohol across the world it makes sense to ship as high a concentration as practical. There is no point shipping water to Italy to fortify wine. 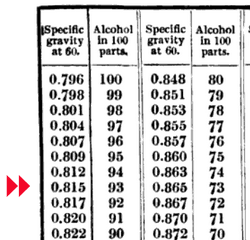 The evidence - a non smoking gun

In a footnote on Page 72 of Charles Fay's book he quotes the following:

"There were landed 1701 bbls. of Alcohol agreeing with the bills of lading - 9 were empty - (no unusually large number) proof 93.35 and specific gravity 0.815 - The cargo came out in excellent condition, so much so that the consignee who wished to relinquish it to the underwriter, could find no excuse to do so."

Now there is some confusion as to the term 'proof spirit' which means different things in different places BUT a common strength of strong pure alcohol is 93% with a specific gavity of 0.815

This is shown in the alcohol tables compiled by the German pharmacist and chemist Johann Tobias Lowitz who first created pure alcohol in 1786. 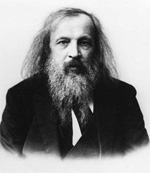 Futher research into the physical properties of alcohol/water mixtures were the basis of the doctoral thesis of Dmitri Mendeleev, who is best known for his formulation of the periodic table of the elements.