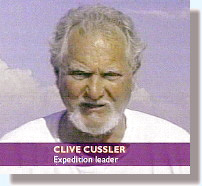 On 9th August 2001 strong media attention was given to the story that the wreck of the 'Mary Celeste' had been located by Clive Cussler, representing the National Underwater & Marine Agency, (NUMA) and John Davis, president of ECO-NOVA Productions of Canada.

The location of the wreck was well documented, and the scientific value of the find perhaps questionable. Given the detail of the investigation in Gibraltar and the fact that she was in service for a number of years subsquently it is unlikely to yield any new information regarding the original mystery. 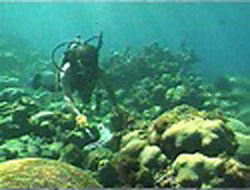 Diver searches Rochelais Reef for the
wreck’s remains: Credit: NUMA
Details of the discovery is detailed in the book "The Sea Hunters II" ISBN 0-399-14925-2

Using Fleming’s coordinates and a cesium marine magnetometer, NUMA says it wasn’t difficult to locate the wreck. Master Diver Mike Fletcher led the team through the barely recognizable fragments of what was once a stout brigantine. Except for a small portion of the lower hull, most of the remains were encased in coral and sand.

The divers salvaged various samples of wood, copper sheathing and ballast stones which maritime specialists later matched to the shipbuilding records of the Mary Celeste. After its extensive search, the NUMA team was confident it found the grave of the ghost ship. An extended hunt verified that no other wrecks were in the vicinity of Rochelais Reef.

A Canadian analysis looks to have proved them wrong.

Scott St George of the Geological Survey of Canada and the Laboratory of Tree-Ring Research at the University of Arizona, analysed samples brought back from Haiti and discovered that the wood was cut from trees still living at least a decade after the Mary Celeste sank.

"I analysed some of the timbers and the tree-ring dating suggested that they couldn't have been part of the Mary Celeste," said Mr St George. "The outermost ring suggests the timber was from trees still growing in 1894, but the Mary Celeste sank 10 years before that."

Mr St George also said that the type of wood - longleaf pine - was unlikely to have been used in the construction of the Mary Celeste, because it was not native to Nova Scotia, where she was built, or the area around New York, where she was refitted.