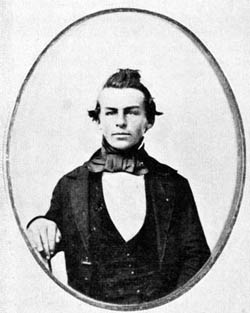 Copy of a letter written on board the
"Mary Celeste"From Captain Briggs
to his mother the Sunday before she
sailed on her fateful voyage.

Background to the Captain of the vessel

An Extract From "The Rose Cottage" Chapter XIV
by Oliver Cobb, cousin to Benjamin's wife Sarah.

In 1862, Benjamin S. Briggs married Sarah E. Cobb, daughter of Rev. Leander Cobb. He had for several years sailed the brig Sea Foam but now was in command of the three masted schooner Forest King and in this vessel Benjamin and Sarah made their honeymoon trip to Europe. Later Benjamin gave up command of the Forest king to his brother Oliver and in 1865 he was in command of the bark Arthur. His son Arthur S. was born that year at Rose Cottage, Marion, Massachusetts.

The next year Mrs. Briggs and Arthur went with Capt. Briggs in the bark Arthur to Marseilles, France. On October 31, 1870, Their daughter Sophia M. was born at Rose Cottage.

Capt. Benjamin had tired of the sea. Both he and his brother Oliver now had growing families and wished to live at home. In 1871, they planned to buy a hardware business in New Bedford, but when it came to making a decision they were influenced by the disastrous experience of their father and did not venture. In 1872, Capt. Briggs bought an interest in the Brig Mary Celeste. He had the cabin remodeled so as better to accommodate his family. The brig was loaded with a cargo of 1700 barrels of Alcohol for Genoa. The captain took with him his wife and two year old daughter Sophia M. Briggs. The son Arthur S, Briggs, being seven years old, was left with his grand mother at Rose Cottage so that he might go to school.

I, the writer was again living at Rose Cottage. At this time the following letters were received by Mrs. Briggs from her son and daughter-in-law. These letters not only indicate the spirit in which they sailed away, but they also fix certain dates.