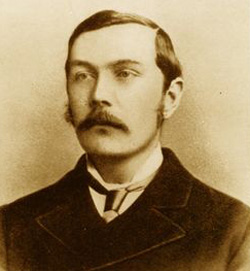 A work of fiction by a famous author

In the month of December in the year 1873, the British ship Dei Gratia steered into Gibraltar, having in tow the derelict brigantine Marie Celeste, which had been picked up in latitude 38 degrees 40', longitude 17 degrees 15' W. There were several circumstances in connection with the condition and appearance of this abandoned vessel which excited considerable comment at the time, and aroused a curiosity which has never been satisfied. What these circumstances were was summed up in an able article which appeared in the Gibraltar Gazette. The curious can find it in the issue for January 4, 1874, unless my memory deceives me. For the benefit of those, however, who may be unable to refer to the paper in question, I shall subjoin a few extracts which touch upon the leading features of the case.

"We have ourselves," says the anonymous writer in the Gazette, "been over the derelict Marie Celeste, and have closely questioned the officers of the Dei Gratia on every point which might throw light on the affair. They are of opinion that she had been abandoned several days, or perhaps weeks, before being picked up. The official log, which was found in the cabin, states that the vessel sailed from Boston to Lisbon, starting upon October 16. It is, however, most imperfectly kept, and affords little information. There is no reference to rough weather, and, indeed, the state of the vessel's paint and rigging excludes the idea that she was abandoned for any such reason. She is perfectly watertight. No signs of a struggle or of violence are to be detected, and there is absolutely nothing to account for the disappearance of the crew. There are several indications that a lady was present on board, a sewing-machine being found in the cabin and some articles of female attire. These probably belonged to the captain's wife, who is mentioned in the log as having accompanied her husband. As an instance of the mildness of the weather, it may be remarked that a bobbin of silk was found standing upon the sewing-machine, though the least roll of the vessel would have precipitated it to the floor. The boats were intact and slung upon the davits; and the cargo, consisting of tallow and American clocks, was untouched. An old-fashioned sword of curious workmanship was discovered among some lumber in the forecastle, and this weapon is said to exhibit a longitudinal striation on the steel, as if it had been recently wiped. It has been placed in the hands of the police, and submitted to Dr. Monaghan, the analyst, for inspection. The result of his examination has not yet been published. We may remark, in conclusion, that Captain Dalton, of the Dei Gratia, an able and intelligent seaman, is of opinion that the Marie Celeste may have been abandoned a considerable distance from the spot at which she was picked up, since a powerful current runs up in that latitude from the African coast. He confesses his inability, however, to advance any hypothesis which can reconcile all the facts of the case. In the utter absence of a clue or grain of evidence, it is to be feared that the fate of the crew of the Marie Celeste will be added to those numerous mysteries of the deep which will never be solved until the great day when the sea shall give up its dead. If crime has been committed, as is much to be suspected, there is little hope of bringing the perpetrators to justice."

I shall supplement this extract from the Gibraltar Gazette by quoting a telegram from Boston, which went the round of the English papers, and represented the total amount of information which had been collected about the Marie Celeste. "She was," it said, "a brigantine of 170 tons burden, and belonged to White, Russell & White, wine importers, of this city. Captain J. W. Tibbs was an old servant of the firm, and was a man of known ability and tried probity. He was accompanied by his wife, aged thirty-one, and their youngest child, five years old. The crew consisted of seven hands, including two coloured seamen, and a boy. There were three passengers, one of whom was the well-known Brooklyn specialist on consumption, Dr. Habakuk Jephson, who was a distinguished advocate for Abolition in the early days of the movement, and whose pamphlet, entitled "Where is thy Brother?" exercised a strong influence on public opinion before the war. The other passengers were Mr. J. Harton, a writer in the employ of the firm, and Mr. Septimius Goring, a half-caste gentleman, from New Orleans. All investigations have failed to throw any light upon the fate of these fourteen human beings. The loss of Dr. Jephson will be felt both in political and scientific circles."

I have here epitomised, for the benefit of the public, all that has been hitherto known concerning the Marie Celeste and her crew, for the past ten years have not in any way helped to elucidate the mystery. I have now taken up my pen with the intention of telling all that I know of the ill-fated voyage. I consider that it is a duty which I owe to society, for symptoms which I am familiar with in others lead me to believe that before many months my tongue and hand may be alike incapable of conveying information. Let me remark, as a preface to my narrative, that I am Joseph Habakuk Jephson, Doctor of Medicine of the University of Harvard, and ex- Consulting Physician of the Samaritan Hospital of Brooklyn.

The full text can be found here